As a birthday present for bf I wanted to give him an experience here and his choice fell on deep sea fishing. It’s low season right now (starting to peak) thus we were the only ones going out with the boat in the hope to catch a couple of Mahi mahi fish (a white fish with quite dense meat).

A couple of days earlier they went out for 6 hours but didn’t catch one fish, so we’d figure we’d hope for a couple … in the end we caught 14!!

The biggest we caught weighed 40 kilos, and as one can imagine the fishing takes a toll- I only caught one of them and bf the rest, he was completely ruined the day after, but he loved the experience. 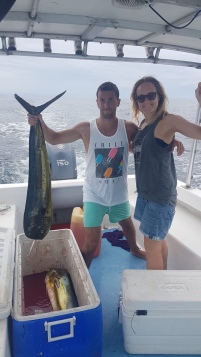 We even got some company by dolphins- added bonus right there! Byron, our guide cleaned the fish on the boat and had soy sauce, so we got to taste the freshest sashimi ever- yummy!

The film below also show the fish being cleaned in the boat, so viewers discretion is advised 😉

A fantastic day out at sea ended with the most INSANE dinners (yes, two…)! We gave some of the fish to two restaurants and asked them if they could make some local specialties- and they delivered! It was for sure the best meals we had here. And the staff at the restaurants were so happy we gave them some of the fish we caught (they could keep a fair bit for themselves) – great solutions that there!

First we had Ceviche, followed by grilled filèt with veggies and baked potatoes, then we had to stop the first meal to make sure we could handle the second one.

For the second meal (after a couple of hours) we got Ceviche (upon our request), fried fish and grilled fish with potato purée!! So so so so good- I still dream of it- even though we were stuffed until the evening after and then some.. 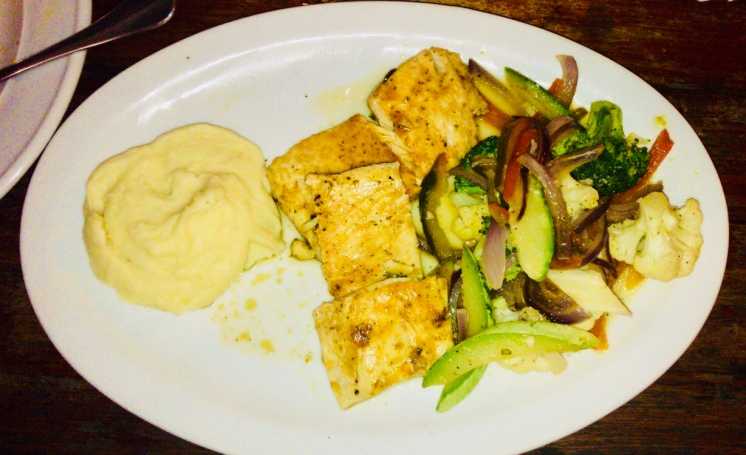 What a way to end our stay in Sámara – next up ; Manuel Antonio National Park 🙂

There was an error retrieving images from Instagram. An attempt will be remade in a few minutes.