In these Apple- launch days, where their Senior Vice President of Retail, Angela Ahrendts got a decent amount of attention for her Burberry trench she wore to the event, I decided to dig deeper into her story. Her name first caught my attention as she was the CEO of Burberry back in 2010 and was credited for taking Burberry from trash- brit brand back to the luxury trench staple it is today.

As my professional background and -future lies in retail I love the way she approaches it as something being hands-on. And that even though there is technology around, you will never be able to replace the human touch, which I am 100% behind (quote from here):

I think that’s where the human communication comes in, you know? I don’t care how advanced technology gets. I don’t think that there’s anything that can replace looking someone in the eyes, touching their hand, you know? 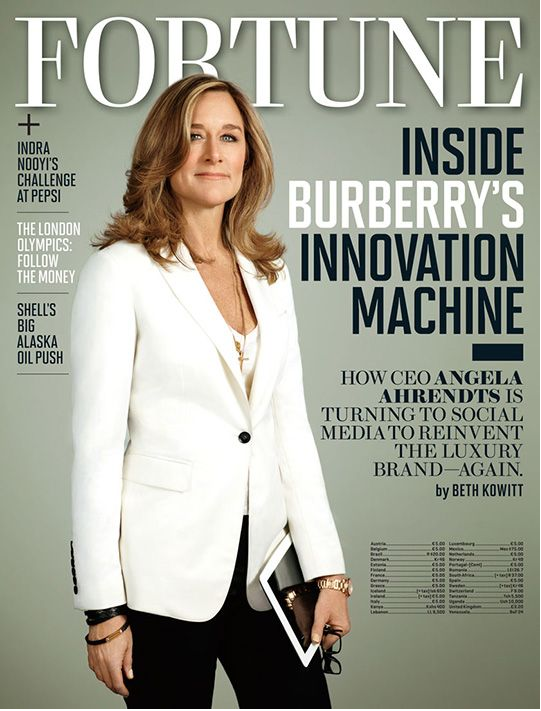 She also has a relentless focus on bridging the brick-and-mortar store with the digital experince, which led Burberry to become the pillar of digital within the luxury retail industry. This would be the perfect application to a job at Apple, but it was Tim Cook (Apples CEO) who had to convince her to come to Apple by firmly confirming to her that she does not need to be a techy as they do in fact ‘have enough of those already’. According to her interviews, Tim Cooks eyes were opened after this TED talk:

She comes from a town of 2 000 inhabitants in the US, so not exactly (as many others) ‘born into’ the luxury retail world. At the age of 21 she moved to NYC and worked her way up to lead Donna Karan, before the age 30. In 2006 she moved to London the be the CEO of Burberry. From what I can read she leads with kindness, and emphasises the importance of the human connection in any company and industry.

The more I read about her, the more I am inspired!

If you want to read more about her, here are some links and sources: